There’s currently a lot of concerted rumination from football fans in the UK in regards to the omnipotent and ever-present Premier League.

In many respects, the EPL is bigger and better than ever, the glitz and glamour simply unrivalled on a global scale. But that can’t hide the growing discontent from many corners suggesting the upper echelons of the game have long forgotten its working-class roots, as the money spins out of control – transfer fees, wages, ticket prices, golden handshakes, merchandise, all skyrocketing far beyond the comprehension of the everyday fan.

That’s all been brought into a sharp focus this week thanks to Richard Scudamore, the Premier League Executive Chairman considered to be the mastermind behind much of the league’s financial success over the past two decades. 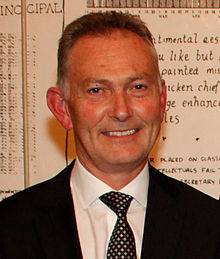 He’s stepping down after 19 years effectively at the helm during which the competition established itself as the world’s pre-eminent footballing league and a commercial behemoth.

All 20 Premier League clubs were subsequently expected to each “gift” £250,000 to the already well-rewarded outgoing executive – a £5m golden handshake. It’s created quite a stir with a number of clubs (mainly the smaller ones) not particularly keen to stump up such a fee, especially in the face of the inevitable backlash from fans.

The gifting arrangement says a lot about the circus that the Premier League has become – where clubs, players, managers, agents, and everyone else involved are so far removed from the reality and struggle that the majority of supporters increasingly endure.

Everyone involved in the league seems to have gotten extraordinarily rich off the back of it – well, everyone except the fans, who are forever asked to dish out more for the privilege of simply supporting their team. Truth be told, the league’s bigwigs probably don’t even call them “fans” anymore – “customers” would be much more appropriate.

I fell in love with football as an adolescent in the early 90s, when the commercialisation of the Premier League was still in its relative infancy, but starting its seep into New Zealand and the rest of the world.

Like any other football fan here, no matter what generation they belong to, I quickly fell in love with a particular club – for some reason, it was Arsenal, despite the fact the club was in a very transitional phase at the time (although the club’s fortunes would soon improve of course). For some equally inexplicable reason, my younger brother decided he was a Newcastle supporter. Like any fan, these allegiances have remained steadfast through the highs and lows these clubs have subsequently experienced.

It’s all a bit bizarre though, isn’t it? This stranglehold that British football has in our country – where if you ask a Kiwi on the street who their favourite football team is, the response will almost certainly be a Liverpool, Manchester, or Arsenal rather than an Eastern Suburbs, Wellington United, or Roslyn Wakari AFC.

Footballers across our country will often complain about having to find a couple of hundred dollars to pay their subs for the season, after forking out that amount without a second thought on a replica shirt and jacket emblazoned with their favourite EPL club’s logo (that’s without going into the dubious manufacturing origins and ridiculous markup on those products).

Sure, part of this clearly harks back to our inextricable colonial ties, but for the most part we’re simply consumers who have been sold the ultimate product from half a world away.

Part of me has long been desperate for a Scudamore-type in New Zealand to step in like a White Knight and better commercialise our national league competitions, thinking it would solve all of our problems.

But what would that really achieve? Where would the money end up going? Although the amounts are obviously but a drop in the ocean compared to the budgets of EPL clubs, there’s already plenty of money sloshing around some of the bigger clubs in our country. As it is, it’s often arguable whether that money is always used wisely.

So, while part of me still dreams of our national league football competitions (Men’s and Women’s) being played in stadiums with massive crowds and matches broadcast far and wide, perhaps we should simply do a better job of embracing what we already have – which is undeniably a lot closer to what football is really about anyway.

I’m not foolish enough to suggest that we need to make a clean break entirely from our addiction to the Premier League. There’s obviously no denying the quality of some of the stars on display. Heck, I can’t deny that I still need to get my EPL fix most weekends.

But if I can ask anything of you, it’s to simply consider who’s really benefiting from the dominance that the Premier League holds over us, and at whose expense.

Perhaps, instead of buying your child another Manchester United shirt for Christmas, consider making it a Northern Lights or Southern United shirt; or maybe even better yet, supporting and celebrating our local grassroots clubs which play such a crucial role in our local communities and footballing pathways.

And perhaps, next time someone asks you who your favourite football team is, reply with your local club. It’s worth doing for the surprise factor alone.