The road to the Chatham Cup final is longest for those clubs entering the Preliminary Round. Between these teams and the oldest trophy in NZ Football’s collection are seven matches and the assorted might of the Federation Leagues top teams. This year I’m following the progress of one branch of the competition all the way to the final!

Within a day or two of the draw I was contacted by Fabian Ukich of HNK Auckland Croatia. As a newly reformed side, with a twenty year history behind them, they were first time entrants to the cup. They were regular competitors in the Australian-Croatian Soccer Tournament, winning out against former NSL sides in 2003. Playing in the Auckland Sunday Football Association League One, they were the lowest ranked side in the competition.

There’s a place on the bus if you want, said Fabian, HNK Auckland’s team manager. You can’t turn down an offer like that.

Their opponents are West Hamilton United, a team who have already graced the pages of ITBOTN in recent weeks. Formed in 1999 they had reached the last-16 of the Chatham Cup once previously, and were playing their games out of the Frankton Railway Combined Sports Club, playing in the WaiBOP Federation Championship League.

Bona-fide, I guess that’s us.

Arriving at the Croatian Cultural Club I was greeted by the familiar faces of Joao Moreira, Harry Edge and Ryan De Vries. Surely HNK Auckland Croatia weren’t bringing in some ringers via their most illustrious registered player, Ivan Vicelich? No, Auckland City were getting in some training ahead of the OFC Champions League final on Sunday.

The HNK players began to arrive, all in their pre-arranged white shoes. The conversations were a mix of Kiwi and Croat, and the sun was shining on the two huge Trobojnica leaning up against the minibus doors. One question kept cropping up though; “Are you ready?”

With a crate of Lion Red, we departed. The stereo pumped out traditional Croatian music, to a mixed reception from everyone piled in the back. A stop in Huntly for a pie and a piss, as well as some pre-match stretching, and soon enough – flag flying out of the passenger window – we arrived at Weka St.

Having played fewer than five games this season in the ASFA’s League 1, HNK Auckland were enthusiastic about the match but not overly confident. At Weka St we parked neatly in the coned off section and were shown to the dressing room where, to the amusement of the squad, the team photo was nearly a decade out of date. Hey ho.

A ball boy looks on.

Frankton Railway Combined Sports club nestles in amongst the suburbs of West Hamilton. A nod to their railway past, the railings surrounding the ground are made from old rails. They certainly could give your ankle a rattle if you failed to clear them, although that definitely didn’t happen to me. No, not me.

The pitch had fallen foul of some local rascals who’d driven across its rolled surface the night before. The damage wasn’t too bad, but the West Hamilton staff were justifiably hacked off about it.

Kickoff was 2pm and there was a small gaggle of expensively equipped photographers pitchside, as well as Andrew Voerman from Fairfax. HNK Auckland set up in a 4-1-4-1 against the claret and blue numbered shirts of West Hamilton.

From the off it was clear that this game was one where the referee was going to have earache by the end of it. While there were blue skies above Hamilton that day, there was no small amount of blue air surrounding each challenge that went in on the pitch.

West Hamilton Utd were marshalled by their player coach, Glenn ‘Brownie’ Brown, who had perfected the art of shouting at his team as if he was in the technical area while also being mid-play on the pitch.

It was HNK Auckland Croatia that struck the first blow within 10 minutes. Nick Farac drove into the area from the left and was clattered to the ground by a claret shirt. The referee pointed to the spot and Captain Zoran Kacic-Bartulovic tucked away the penalty before tearing off towards the sixty or so enthusiastic supporters who had made the journey from West Auckland to West Hamilton.

One nil up, the game turned as both teams exchanged yellow cards. West Hamilton applied relentless pressure. HNK’s major outlet, Felipe Buitrago, could occasionally skip down the left but the claret tide was rising towards Marko Nuich in the away teams goal. A clumsy sliding challenge just inside the box and the penalty count was levelled. Reuben Henderson made no mistake from the spot, sending the keeper the wrong way. 1 – 1.

It was the second penalty that changed the game. HNK, again under pressure, conceded another spot kick. The first attempt was saved by Marko Nuich, who dived the wrong way but kicked out and skied the ball clear. The linesman had flagged though and the referee ordered a retake as Nuich had apparently come off his line. The video of this penalty doesn’t show that, but the staggered run of Henderson – scoring his second – may have misled the keeper. 2 – 1.

Felipe Buitrago on the ball.

Four minutes later, West Hamilton led 3 – 1 and HNK Auckland Croatia were down a man. A bout of penalty box ping-pong eventually saw Harry Rose slot home from close range to the fury of HNK, convinced of an offside. Nuich, steaming from the penalty retake, approached the linesman and made his views clear in no uncertain terms. Red card and an unexpected Chatham Cup debut for Peter Van Kampen.

Half time probably prevented the game kicking off even further and the fifteen minute break saw the HNK team-talk take place in their dugout.

Despite being a man down, it wasn’t immediately obvious where the extra man was for West Hamilton. HNK kept pushing forward and attempting to slide a ball beyond the last man for their wingers to chase onto. Repeated attempts to loft a ball over the top of West Hamilton were cleared up with ease by the home side defence, who showed no fear in the air.

It was Hamilton who added to their score though. Making use of the extra man, Nick Finlay slalomed into the box and hammered the ball across the keeper and into the far corner of the goal. 4 – 1 and it looked like it was over for the Croatian side.

Except it wasn’t. Nick Farac was fouled in a similar position in the penalty box. Again Zoran Kacic-Bartulovic stepped up and scored. 4 – 2.

The goal injected new urgency into HNK Auckland Croatia who spent much of the final quarter of the match knocking on the door. There were plenty of penalty box stramashes, but deflections, last ditch defending and some fingertip saves kept them from reducing the deficit.

Instead it was West Hamilton who would extend their league with another disputed close-range goal. As they celebrated, Tony Tomas took the ball back to the centre spot – only to be bumped into by the West Hamilton keeper who’d gone up to join the celebrations. Howls from the away supporters, but nothing doing from the referee who had been updating his scorecard.

Help was at hand by one of the weirdest red cards I’ve seen. About to kick off, West Hamilton’s Alex Whitehead shoved his opposite number to the deck. Apparently he had grown frustrated with them overstepping the line at kickoff, the red mist had descended and the red card was raised. One all on sending offs, but the scoreline couldn’t be brought level by the time the final whistle went. Final score, West Hamilton United 5 – 2 HNK Auckland Croatia.

Sat with HNK Auckland Croatia in the car-park immediately after the game, the mood was disappointment. A decent post-match feed from West Hamilton and some kind words from their management in the presentation eased the frustration, although comment on an indecisive refereeing performance drew chuckles and nods from both side – sorry ref.

HNK Auckland Croatia were out of the cup. West Hamilton United had made it to round one.

The minibus home was strangely jubilant. After all, the team hadn’t played more than a handful of games and even a man down had been competitive. Their play had been physical, but the sense of pride was obvious. They’d played in the cup. Much of the talk was over the little incidents, with Nuich taking the plaudits as the first HNK Auckland player to receive a Chatham Cup red card and Zoran Kacic-Bartulovic being celebrated as the clubs top scorer in the competition.

Another Huntly stop, this time to savour a Maccas and pick up another box of Lion Red. The sun set as we headed back to Auckland, as it had on HNK Auckland’s cup chances this year. They’ll be back though, you can be sure of that.

Hard luck for HNK, but West Hamilton United have been drawn away against Lotto NRFL Division One side Franklin United in Round One. I’ll be at Bledisloe Park to see if they can pull off a cupset! 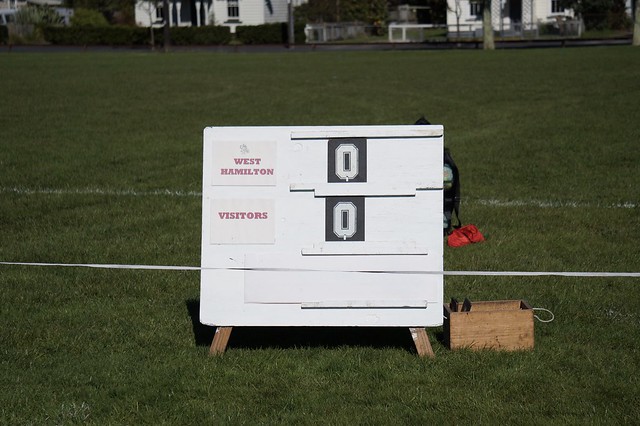