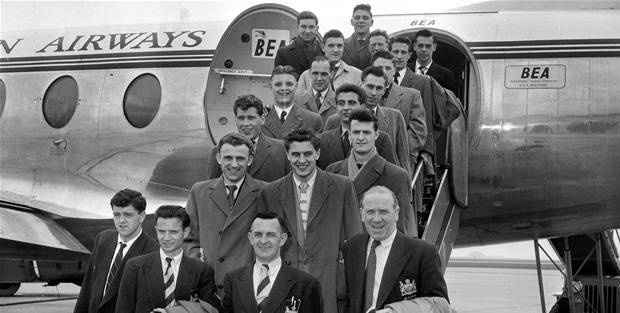 There are English men of a certain age, in their late sixties onwards, who will insist that Duncan Edwards was the greatest player to ever pull on an England shirt. My father’s one of them. He was nine years old in 1958, his own father a staunch Manchester United supporter, when Edwards died in a Munich hospital.

I suspect in the bars of Turin, there are those of a similar age who speak of Il Grande Torino, the dominant Italian side of the 1940’s, in the same way.

In Lusaka too, there will be memories of the Chipolopolo, the Zambian national team, who looked set to qualify for the 1994 World Cup, only to suffer the same fate as the side from Torino and the Busby Babes.

Losing a team is a tragedy that resonates through the football world. Families lose sons, husbands and fathers. Supporters lose their heroes. Clubs find themselves with a seemingly irreparable void where their reason for being is. Associação Chapecoense de Futebol are the latest team to suffer at the hands of cruel misfortune.

Football is an ongoing story for clubs, players & supporters, one that has endless potential.

Potential is a powerful narcotic in the life of supporters and players, it can be applied to individuals and teams, to whole seasons. It’s inextricably linked to hope; hope that this year can be better than last year, hope that success can be maintained, hope that the players fulfil or exceed their potential. When supporters lose their team, it’s hard not to recognise and empathise with the loss of that potential, the grieving for what was but also what was to be. What could have been.

The game of football is often a fruitless search for fulfilment, in that no matter how big the victory feels, the elation and the success, soon the focus shifts to the future and the uncertainty of the next match. The thread that holds it together though, is the team. Sure, teams change and morph, players acquired and discarded. But, like the ship of Theseus and Trigger’s broom, it’s still the same team. Having that thread cut is brutal in its suddenness.

The Brazilian and world football community mourns, recognising the basic commonality between all teams. The offers of help from Chapecoense’s fellow Brasilian Serie A sides and their Copa Sud America final opponents insisting the trophy not be contested reveal that even if the game is a relentless cycle of sponsorship and advertising on the surface, there’s a brilliant humanity lying underneath.

The history of the game is punctured with moments when sides, often around their peak, are suddenly taken from the world. History proves that the club will outlast the players, but that it will never forget those who it has lost. The clock sits at Old Trafford, it’s hands stilled. The Basilica di Superga has names carved on its memorial. The Copper Bullets are buried in Heroes Acre’ outside the Independence Stadium.

The beautiful game will go on as it has for Torino, Manchester United and the Zambian National Team. It will go on for Chapecoense. But for now, and forever, it will remember those it has lost.