The potential for cupsets increase with the entry of NRFL Premier teams in the Chatham Cup. The road to Kiwitea St for Cambridge had seen them swat aside Colo Boys and Auckland University. Their opponents, despite being leagues above, had failed to score in their last two outings as they tussle with last years NRFL Premier champions, Eastern Suburbs.

In the Kiwitea clubrooms the Copa America was playing, Uruguay a goal and a man down against Mexico. A quiet beer before kickoff was rewarded with a red card for Mexico, a goal from Uruguay before El Tri roared back in the final minutes – winning 3 – 1. Rafael Marquez, all of 37 years, scored an absolute screamer.

The sun warmed the concrete of the shed and fireworks flew, Bucketman giving his usual welcome to his favoured yellow, yellow from atop his stepladder.

The Cambridge keeper was vocal from the off, broadcasting loud instructions and confidence building praise clear down the pitch. The first chance fell to the visitors, their #2 taking a ball on he bounce and thinking about it just too long for it to be on target. I’m not a traditionalist by any means, but a forward wearing #2? Heavens.

Central, in yellow shirts and blue shorts, had the ball in the net first. Finn Cochran’s wing work found Tade, who drove the ball across for lively striker Nicolas Zambrano to tap home. The linesmans flag signalled the offside. No goal.

A minute later, sixteen gone, and Cambridge were ahead. A counterattacking pass found Glen Carmicheal free and clear on the right, just inside the opposition half. As he advanced he spotted Danyon Drake off his line. The 30-yard chip arced beautifully over the backpedalling keeper and dipped into the net. A brilliant goal and the chance of a cupset.

But Central were in no mood for romance. Emiliano Tade, who provided much of the spark and urgency for the Yellows, fired home the equaliser two minutes later. The Argentine turned provider for Vincent Pineau on 20 minutes, and then added to his tally four minutes later. The final goal was particularly sweet, a dance into the box and then controlling the ball as defenders flew in, before sliding it under the keeper.

Murmurs in the shed that Tade is retiring from summer football. On this showing, he’ll be a big loss for Auckland City if that’s true.

Sausages with onions, ketchup and a can of coke. Also good to see PEC Zwolle’s David Browne at Kiwitea Street.

Just before the second half started I overheard someone say that Central should be able to double their score in the second half. As it was, the curse of the supporters comment meant that we were treated to a tense, attritional but competitive display from both sides. Cambridge, resplendent in red and white stripes, held firm and exhibited solid, full blooded (but not dirty) defending and sought a way back in on the counter attack.

A cluster of travelling supporters opposite delighted in shouting ‘BORING’ when Central played the ball between their back four. The first goal hadn’t dimmed Drake’s desire to get out of his 18 yard box, resulting in a few heart in mouth moments. Not everyone’s Manuel Neuer, Dan.

Tade was instrumental in providing the Central fourth, after a thirty two minute lockout by Cambridge. Cutting in and across, he laid a ball to the edge of the area on a platter for Nicolas Zambrano, who sheered it across the keeper.

4 – 1. Game over? Not on your life. Cambridge were determined to show their worth and the fourth goal served to increase the intensity in the match. Jason Chewins, a combative presence in midfield throughout the game, threaded a beautiful ball to young Callum McLeod who advanced on Drake from an acute angle and placed an angle shot home to bring it back to 4 – 2. Nice.

The final ten minutes were frantic as Cambridge sought to drag Central back, but despite some heroics at both ends from the Waikato side, it was just beyond them. Their cup run ends here, but Centrals has just begun. Bring on Round 3! 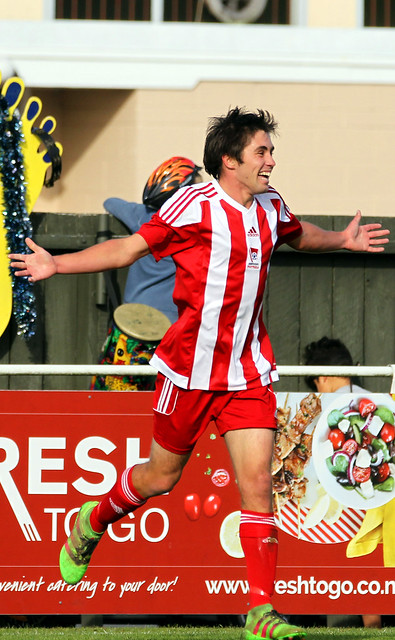