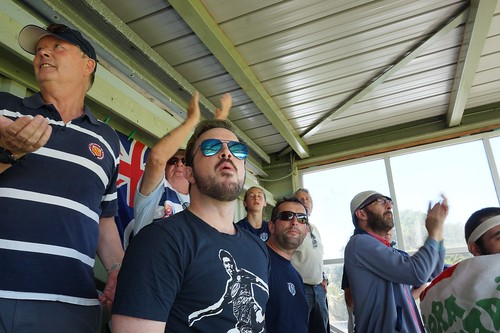 I’m an immigrant, a foreigner. I wasn’t born in Aotearoa New Zealand, I didn’t grow up here. I’m ticking off the days before I can apply to citizenship, and I never want to leave this beautiful country, but it’s not the same.

A friend of mine, across from England on his O.E, talked about how on the surface Aotearoa has an air of Englishness, a colonial hangover that remains in street-names, coinage and the dominant white western European culture. But, he noted, the minute you scratch that surface you find yourself somewhere else, somewhere quite different. For all the jokes about Aotearoa being England fifteen years ago, it isn’t. It’s Aotearoa, right here and now.

That can be quite jarring. After all, and I’ve written about this before, I binned off my life in the UK over a period of seven months in order to fling myself into the future and the arms of my wonderful wife. Thank god she caught me, and agreed to marry me. That could have been awkward.

“There’s no football in New Zealand, you’re mad” a few of my mates on the terraces told me, “How will you do without it?” I laughed it off, pointing at Super Rugby and the Warriors as potential replacements.

Noisy bugger, I am.

They weren’t though. I’m a proud Blues season ticket holder, having endured the desperate 2015 season. I’ve been to see the Warriors once, but being born in Southern England means that League is as foreign as feijoa to me. But it’s not the same as football, is it?

Football in England wasn’t just about the game. It was about the weekend or the cheeky evening kickoff in midweek. It was something to look forward to, because it wasn’t work. Saturday afternoons involved getting to a pub near the ground for the lunchtime kickoff on Sky, a few beers with friends while watching the game. Then a walk down to the ground, maybe a quick one in the clubhouse before shuffling to the halfway line so we could stand behind the goal we were attacking – if you choose one and get it wrong it’s a trudge.

It was standing with friends, with strangers, and singing and shouting and trying to put the keeper off by providing a lengthy and detailed criticism of his beard, his shirt or occasionally querying his opinion on the Mugabe government or the complexities of the Monroe Doctrine – no, really. And having a few beers as well. Quite a few beers.

Losses were devastating, except they weren’t because you’d be back next week. Draws, depending on how they came about, could go either way. A last minute equaliser for your team is as good as a win, one for them is like a defeat. Wins could be ecstatic, swaggering victories by a clear margin. They could also be fingernail chewingly tight, hanging on under a barrage to preserve the lead. Cheers at the final whistle, relief, joy and pure delight. See you next week? Coming to the pub? Yeah, alright.

Away games were messy affairs involving timetables and gentle pools of condensation on train tables as cold cans were emptied and crushed en route. Visiting a new suburb, a new town, a new ground. Trying the pies, attempting to outsing the home support and the feeling of belonging, of being a part of it all.

Swinging back to my original point, the fact that there is football here matters a lot to me. I’m a long way from the country I grew up in, a long way from a culture I am familiar with and yet, even here there’s football. Tracey put it best the other day. Football makes me happy. And for immigrants like me, it’s something that links the there and the here, the past and the present and future. It’s something reliable, something I’m sure of as I adjust and adapt to living in a new country. It’s comfort.

It’s comforting, because the game’s the same. Ninety minutes plus stoppages, eleven a side, it always bloody rains when you forget your coat. Stand by the side of the pitch among people supporting your side and it’s all there, the talk and the friendship and the shared enjoyment of the game. You can get a beer in the club bar afterwards. It’s not the same, but then again I shouldn’t expect it to be the same. This ain’t England, this is Aotearoa. But there’s football, and that’s enough.