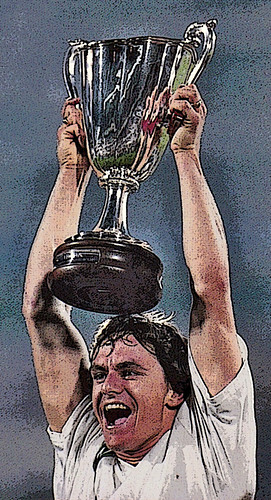 How good was Wynton Rufer, Oceania Player Of The Century? Well the award, which he won ahead of World Cup Winner Christian Karembeu, should give you a clue. Or the Oceania Player Of The Year awards, two of them – tied with Harry Kewell. And the one in two goal ratio for the All Whites. Or the 224 goals in 539 senior appearances.

The peak of his career, as with so many All Whites today, was spent overseas. There were trophies in Switzerland, league titles in Germany and a single Chatham Cup for Central United in 1997. He tied with Ronald Koeman as UEFA Champions League top scorer in 93/94. And for two seasons he was player coach of the Kingz.

Almost every goal he scored for the Kingz is recorded here. He scored twelve goals in total during his two year stint. As a snapshot of his talents they are a final flourish of a two footed poacher who was equally good in the area, a demonstration that at thirty-eight years old, he was still one hell of a player.

There’s no better example of this than the first goal he scored for the Kingz. They’d lost their opening two fixtures, before beating South Melbourne at North Harbour the week before with an Aaron Silva goal. The fourth game of their first season, at Newcastle, and the side were a goal down with five minutes to play. 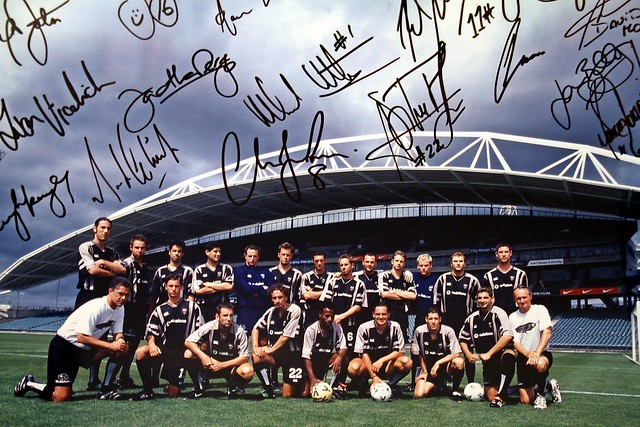 A long ball is raked into the box from right back. Fred De Jong heads, stumbles forwards. Rufer half shapes to shoot but De Jong recovers and slides the ball out wide right to Marcus Stergiopoulos. A Newcastle defender goes to cover, Stergiopoulos cuts back and drives inside, taking a touch with his right foot before delivering a curving left foot cross.

At this point, Rufer’s being sort of marked by four players – except he isn’t, he’s pulled away from his marker at the edge of the eighteen yard box and is keeping his eyes on the ball as he trots towards the defender between him and the goal.

The ball dips towards the penalty spot and Rufer turns his back to goal, keeping his eyes locked on the ball. The defender behind him charges forwards to make the clearance, assuming that he’s given up on the header. But Rufer hasn’t given up, his turn away from goal is to set his standing leg. His right leg bends as he leans back, pivoting on it. His left leg swings round and connects a sweeping, sweet, first time volley that passes the keeper and swishes the side netting.

It’s a beautiful goal. It’s a great goal. It’s not instinctive, it’s not a fluke of reflex. From the moment Wynton’s eyes lock onto the flight of the ball, he’s decided what he’s going to do and calculated the space he’s going to need and the position he’s going to adopt in order to do it.

Great players are ones who appear to make time slow down for themselves, provide enough room for thought and calculation to make great things happen. Bergkamp could do it, Zidane could do it. Rufer could do it.

How good was Wynton Rufer? He was good enough to score that goal.