8 Games That Made A Supporter

Let’s start with someone who knows what they’re talking about.

“What is a club in any case? Not the buildings or the directors or the people who are paid to represent it. It’s not the television contracts, get-out clauses, marketing departments or executive boxes. It’s the noise, the passion, the feeling of belonging, the pride in your city. It’s a small boy clambering up stadium steps for the very first time, gripping his father’s hand, gawping at that hallowed stretch of turf beneath him and, without being able to do a thing about it, falling in love.” – Sir Bobby Robson

I’ve been to a lot of football matches, and they’re not all included in this blog. The annual trip to Wigan with my father to watch Portsmouth, the glorious FA Cup Semi and Final of 2008 and the non-league game at tiny Cogenhoe United. Even the bloody freezing night in Birmingham, or the Wealdstone away match in 2014. They’re all good games, but looking at a scratch list I made, I decided to pick eight games which led me to, as Sir Bobby puts it, fall in love without being able to do a thing about it. Lovely turn of phrase, that. 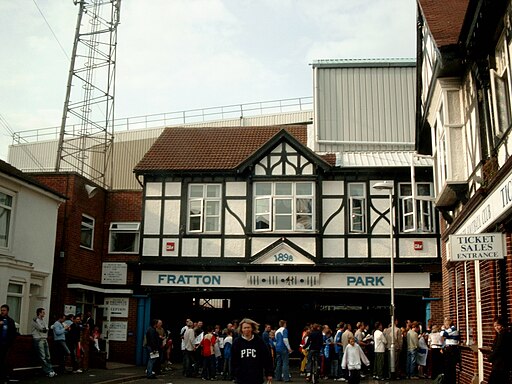 It wasn’t my first game at Fratton Park, far from it. But it was the one that sprang immediately to mind when I considered which one to choose. A new manager, after months and months of losing. A side cobbled together from the most cut-priced of overseas imports which looked destined for relegation.

And we won. Despite going two nil up and then it getting back to two all at half time, we won. Both goals came in the last ten minutes, as first the tension and then the noise ratcheted up. In the North Stand, opposite the fine old Archibald Leach designed Main Stand, the noise was on a par with the famed Fratton End.

The players furiously waved their arms at the crowd, urging us louder, louder if we wanted to win. We delivered, so did they. Diomansay Kamara, followed by Lomana Lua Lua.

I spent a lot of my life in Northampton, but this was the sole occasion I headed right across to the other side of town and Sixfields Stadium. The Cobblers had been far from cobblers during that time, getting promoted and relegated. But football comes second in Northampton, and rugby comes first. Sound familiar?

An own goal decided it. Former Forest player Chris Doig putting it into his net under pressure from future nearly-an-England-player Grant Holt. Colin Calderwood, who’d got Northampton promoted was in their dugout, his former assistant John Gorman in the home one. The game was dire, to be honest.

Of more interest to my Dad and me was the mammoth centre back captaining the Nottingham team that day. He was a monster, looked overweight to my mind. His name was Wes Morgan. I wonder what happened to him, eh?

Unable to afford the thirty to forty quid a trip to Fratton Park could cost in my final year at University, I often bunked on a train three stops north to Havant and paid twelve on the gate at Westleigh Park. With a couple of cans and a hip flask, you could have a whole afternoon of football for under twenty quid.

It was a good side, one which would go on a stunning cup run the following season – even taking the lead against Liverpool at Anfield. The strike force of Rocky Baptiste and Richard Pacquette were as deadly as any in the division. An away trip for the last game of the 06/07 regular season was a must with playoff positions in the balance, so we all piled on a train to a place I would return to nearly seven years later, Dulwich. 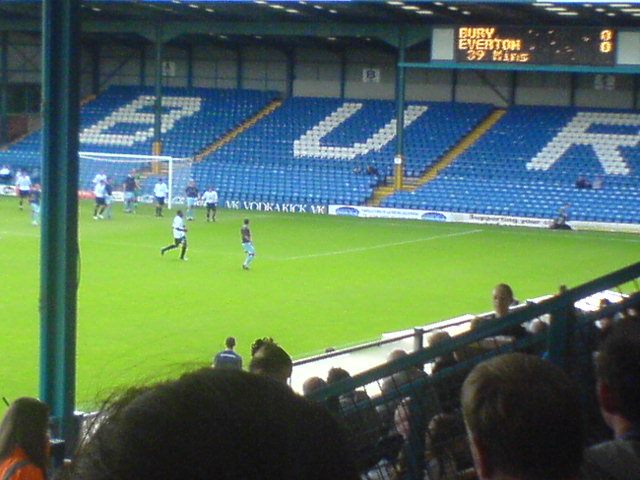 League Two, or the third division in old money. Taking the chance to ride the tram all the way to Bury, I caught a game from the stand at Gigg Lane. The Shakers had been on an unbeaten run and Peter Jackson’s (no, not that one) Imps weren’t going to get in the way.

The football wasn’t great, the aggressive tackling and outright hostility towards Lincoln’s Romanian striker Adrian Patulea, who spent an awful lot of time rolling around on the floor.

It was cold and there were barely 3,000 people inside the ground. I say barely 3,000, that’s not bad for League Two. Bury didn’t grab me though, there was no excitement bar the tram trip back to Manchester.

This was a City yet to fully realise the power that money could bring them. Hart in goal, Kompany in midfield and the British record transfer signing from Real Madrid, Robinho up front. Tickets were cheap to students, so a few of us got together and headed out to Eastlands.

City hadn’t been winning and it would be three years before they won anything, but we were treated to the pleasure of Robinho living up to his billing as Pele’s successor that afternoon – banging in three goals. Looking back at the game it was all about the Brazilian, and Rory Delap’s long throw ability. Rewatching the highlights I noticed how influential the 19 year old Daniel Sturridge was on two of those goals.

I’d arrived in Munich 48 hours earlier, reeking of beer and sweat after haring it to the train station from the excellent Sziget Festival in Budapest. After a guided tour of the grand old city, a sunbathe in the English gardens and a wander to a beer hall, I found myself adopted.

The city was swarming with BvB supporters, all hoping to add to their growing trophy cabinet by beating their rivals Bayern at the Allianz Arena. Within an hour I had been handed a ticket to the game and more beer than I could handle. The game itself was close, but Munich had too much quality – Thomas Muller scoring the winner, although Lewandowski pulled one back for BvB. The Champions League final at the end of the season would see the same two teams meet, with the same scoreline.

Afterwards we hit the town, and I couldn’t have been more grateful when it didn’t hit back too hard the next morning.

February in Berlin is cold. Snow lay on the ground around Alexanderplatz as I got on the S-Bahn  towards Tiergarten. When I arrived, clutching my Hertha scarf, I was swept out into the crowd – singing, drumming, drinking. Police lined the street, held back clusters of F.C Union supporters across the street. There’s footage of it here.

And the Olympiastadion. What the Allianz Arena has in colour and form, this had in history and size. Again I was adopted by some of the Hertha hardcore, who worked a neat trick with swapping passes to funnel more people into their row than could sit. So we didn’t. The tifo went up at the start of the game, we were right under it, and I was warned not to yell too much in English.

I failed, miserably, as Ronny equalised on 86 minutes having been two nil down with 20 minutes to play. The Ostkurve went crazy. Beer went everywhere. It was brilliant.

After a run of attendances which were never south of 40,000 there suddenly came a drop to 492. It chucked it down that day, and apart from a few minutes finishing pints in the bar at the start of the second half, we were stood out in it.

I was living in London and Champion Hill was down the road. My mates went, said it was brilliant. I decided to give it a try and was hooked. The day was tragic in one way, talismanic Patrick Bateman lookalike striker Harry Ottaway broke his leg. But I was bewitched by the neat passing of Gavin Rose’s team and the magic of the number 10, the Turkish Messi, Erhun Oztumer.

I kept going back, every game I could get to. I made friends, joined in with the chants, endured some messy, messy away days and turned out for the supporters team. I felt at home, among friends, in a city that was often harsh to newcomers. Which is what being a supporter, often, is all about