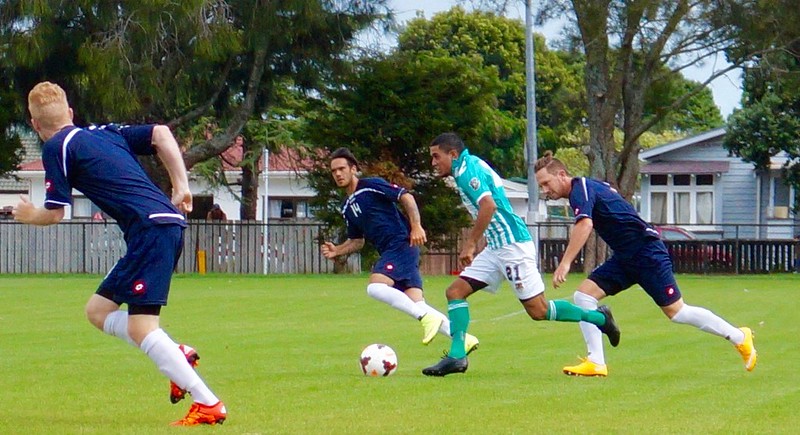 Saturday afternoon, just under a week before the NRFL season kicks off and while clouds gather over Walter Massey Park there’s enough heat in the air to make you wish you’d brought a hat or slapped on some sun cream. The large badge on the side of the clubhouse, lighthouse and the Manukau Heads prominent, let everyone pulling into the carpark know this is the home of Manukau City AFC.

The Lotto NRFL Division Two side, who missed out on the promotion spots by 10 points last season, were finishing their pre-season schedule with a match-up against NRFL Premier League and Chatham Cup semi-finalists Birkenhead United.

Special mention to the pitch which received 0/10 in Enzo’s pre-season assessment a few years back. The current pitch 1 at Walter Massey was looking verdant, an ideal setting for an afternoon of goals.

While two leagues separate the sides, the commitment and discipline of Manukau City in the early stages meant their lofty opponents were well and truly matched. Birkenhead tested City’s defence with searching balls attempting to break the offside trap and were successful, breaking loose down the left before firing home. 0 – 1 to the visitors.

It was 0 – 2 a few minutes later, a diving header in the box which involved not a small amount of skill. However the goalscorer raised his arm and informed the referee he was offside, a sporting gesture that pleased the families of the City players watching from the grassy bank. The voice of City coach Kevin Fallon urging his side to “organise! organise!” was matched by the attempts of his players to retain or retrieve possession.

Their most significant outlet was new signing, Ubaldo Espinoza, a diminutive playmaker who went down under a heavy challenge in the penalty area. One cooly dispatched spot kick later and the teams were level. This woke up the Lotto NRFL Prem side and their passing seemed to become tighter, even as City attempted to disrupt their play. At one point Espinoza went down on the near touchline, attempting to escape three players attentions. When he didn’t get a free kick, the Birkenhead dugout commented “You’re not in South America now”. No need for that lads. 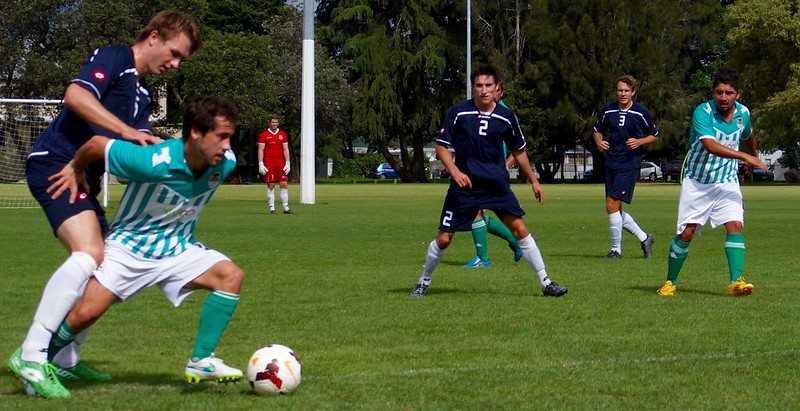 No need, because at half time Birko were ahead. Their tall, mobile no. 9 shimmying across the face of goal unchallenged before thumping the ball into the far corner.

The second half started frenetically, with City searching for an equaliser. An attempted overhead kick and a tame shot at the Birko keeper were the result of pressuring a reoganising North shore side. They had a goal ruled out for offside early on though, from their jet heeled yellow booted #18.

The word that I heard repeatedly from the on pitch Birko half time team talk was width, and it soon became clear that they were going to hug the touchlines and stretch the Div 2 team. 1 – 3 came from City failing to clear a corner they won after switching play and pulling players out of position. 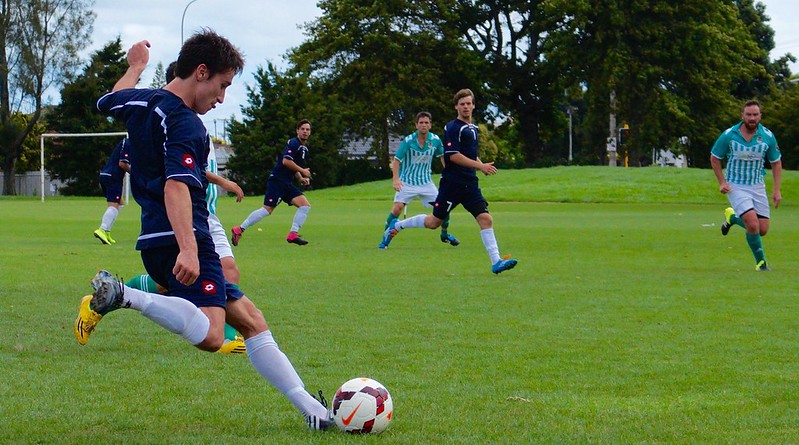 1 – 4 came shortly after. The breakdown of a Manukau attack in Birkenhead’s half was exploited, the quick ball from back to front leaving a gap in front of the defence and the net rippled. City were struggling to defend against play being stretched but still looked like they could score. And they did. 2 – 4. Espinoza at the heart of it again, collecting a headed ball from a throw and then laying the ball on for a team mate. I’m always in favour of a #10 with a low centre of gravity and the ability to pass like spreading warm butter on toast. Birkenhead came back though. 2 – 5, a fast break down the left and City’s keeper was left with no chance. That ended their scoring for the afternoon, but there were two more goals to come.

3 – 5. City refused to give up, working the ball down the right wing and pinging the ball into the box. The chance looked gone after it reached a weak header, but the ball dropped to a team mate and the comeback was on.

There were two more chances for City, the ball being rolled across the box with nobody to gamble on it and good approach play let down by the final pass.

4 – 5! Throw in down the right hand side, flicked on with a neat control and finish.

Birkenhead looked comfortable on the ball, competent in possession and took their chances with ease. Manukau City were motivated, energised and able to score four goals when their passing came together. Both teams look like they’re ready for the new season. Bring it on.

More photos available by clicking below…