Every pom gets badly sunburned in New Zealand at least once. For me last Christmas day on the beach at Nelson was that once, having failed to reapply after having a dip. I was redder than a card dished out late on in a Waitakere game with a burn more aggressive than a Chad Coombes camera high five. Yesterday was a scorcher and I can only imagine that today there’s a few English accented folks grimacing every time their shirt scrapes against their shoulders.

Kiwitea St welcomed the WeeNix, a moniker adopted by commentators now, the Wellington Phoenix reserve/youth side. Among their ranks were many of the gutsy talented lads who’d taken Brazil to the wire in the World Cup last year. I say lads, because they are, young ones at that. 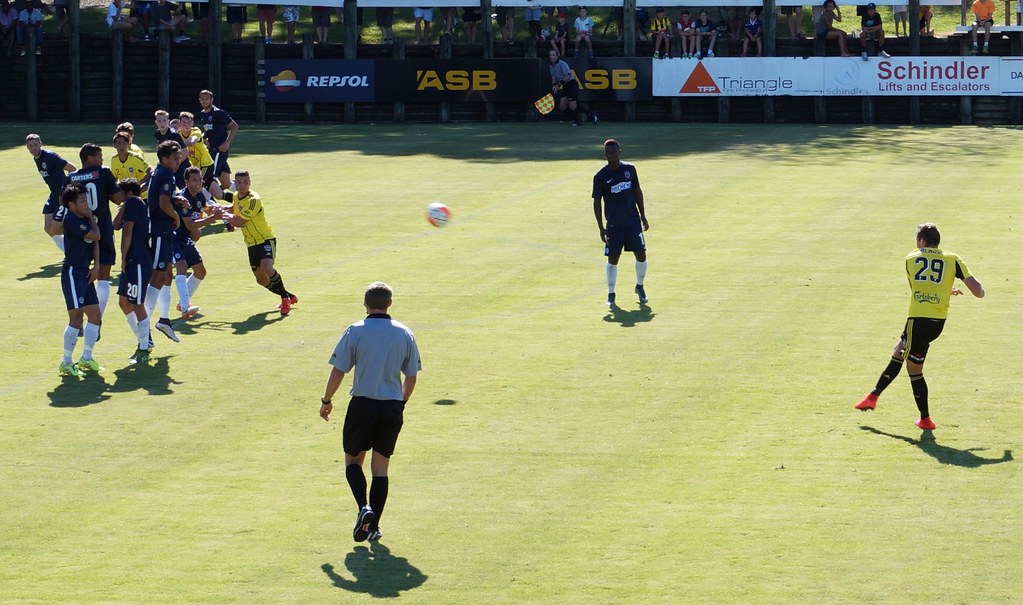 Since my last visit Mikel Alvaro has departed to Europe, depriving Auckland of an underrated metronomic influence in midfield. The pairing of Marko Dordevic and Michael Den Heijer at centre back looks promising, mind, particularly with the experience of Berlanga and Iwata on the wings. Not sure whether it was the shadows, but Takuya still looks like he’s got a black eye after his epic head smash in the Club World Cup. Ahead of the defence sits Hudson-Wihongi, with Mario Bilen and Emiliano Tade making up the midfield. Wide left, Clayton Lewis. Wide right, Ryan De Vries. And up top, New Zealand’s dabbing champion, Joao Moreira.

And for the WeeNix…

A lot of talent there. And a truly, truly disturbing haircut. Oli Sail was once of the ACFC/Central stable and it’s terrible to see a good player lack the sort of support that prevents whatever it is on top of his head from happening. Poor bloke. 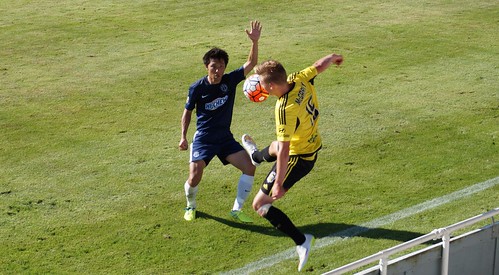 Did I mention it was hot? In the shed we had a weird sauna effect going on. The half four kick off time was time to mean sitting on the bottom concrete terrace was out of the question, save one brave wahine who was sun hatted and blanketed against the burn. As the game progressed the shadow reduced, forcing us into a tighter and tighter space like James Bond trying not to get his knackers burned by a laser. That hot, folks. That hot.

Within 11 minutes we had a goal. Joao Moreira can score ridiculous headers but his subtle dink over the oncoming Sail was so delicate and slow motion that it was only the ripple of the net that let us know he’d scored.

Weenix look good in attack, but at times it was men against boys. I suppose the positive is their technical ability, which can be augmented with bulking up and gaining some niggly experience on the park. In defence, that lack of experience showed a bit with Clayton Lewis being sent sprawling by a challenge that could have been avoided in favour of keeping pace and showing him the outside. The subsequent penalty heightened the Oli Sail/Joe Hart doppleganger, the WeeNix keeper beating the crossbar and waving his arms only for Moreira to place the ball straight down the middle. Two nil.

A reaction and an indication of their potential. Immediately from the restart a peach of a ball into Andrew Blake, whose chest control took Iwata and Den Heijer by surprise. The onrushing Rivas and Den Heijer’s harrying couldn’t prevent him slipping the ball goalwards and it was tipped onto the post by a sliding Dordevic only for Cahill-Fleury to sort of not actually touch it as the spin took it over the line and back out where Takuya hammered it away. The linesman gave it, the replays look decent. Two one. Game on? 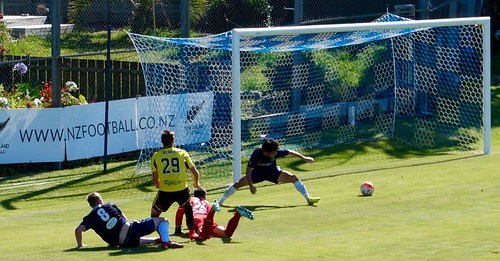 Yeah, nah. The heat took its toll as the game wore on and a sliding finish under or over Sail by De Vries was followed by Moreira completing his hat trick before half time. Moreira’s goal was an indication of how confident he was feeling, taking an extra touch before blasting it in from two yards. In the shed the time between the first touch and the shot was years, decades, millenia as we all explored the possibility of him missing. He didn’t though. Four one at half time.

Half time and a dash past Anthony Hudson, who has definitely been working his tan this summer, for a cold beer. It was a tad warm still. The sprinklers came on and there was a brief discussion about the need for a pitch invasion. That water looked cool, refreshing and blissful. We didn’t, noting Tom the groundsman had both a garden fork and a spade on hand. Don’t mess with Tom.

The second half, well, we lost 0 – 1. If we were playing ‘Let’s hit the post’ we won 3 – 0. Moreira hammered the upright, Tade’s chip over Sail pinged off the bar and another chance rattled the white sticks. De Vries had one ruled out for offside as well. It could have been seven. It wasn’t though.

The WeeNix’s goal belied their ability to move the ball around. Long ball, flick header, gamble from Cahill-Fleury, goal. Good composure to not attempt to knock it around the keeper and waiting for him to commit. Four two, the sign of a good football match. I was impressed with McGarry, Rogerson and Blake’s commitment, Singh showed a few flashes of what he could do and despite that hair, Sail kept the scoreline down in a few one on ones. But in the end though, City were just too hot for them. 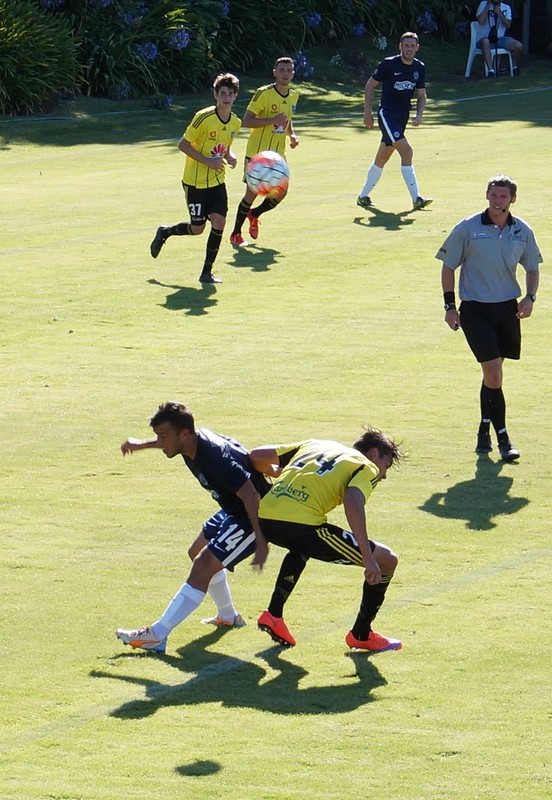 As we all dreamt of rainfall, the whistle blew. 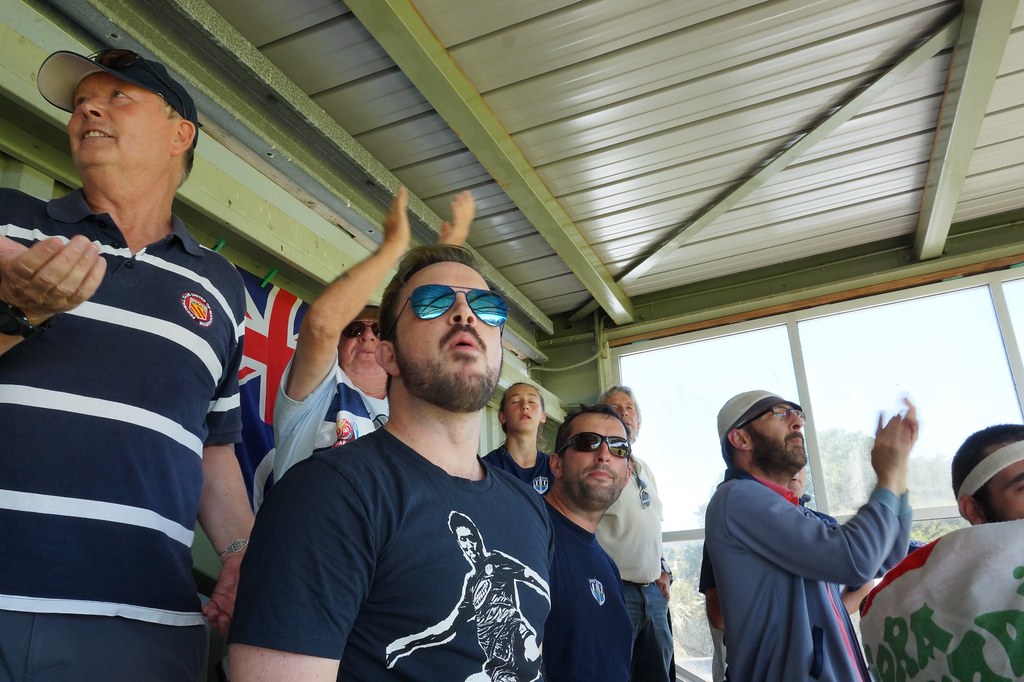 I wasn’t kidding when I said I had blue tinted spectacles on.