At about half twelve I was already restless. I was always restless on match days. Usually, when I lived in London, the hangover from the Friday night kept me under a duvet until midday when a sudden rush of energy would propel me from bed, to shower, to street. Sometimes I’d be lucky enough to have gotten dressed in the time inbetween. This time though I was in London as a tourist and, despite walking both banks of the Thames from London to Tower Bridge and enjoying what England considers a flat white, I was shiftier than Diego Costa around a sprawled defender.

The last time I had made it to a competitive game at Champion Hill, home of Dulwich Hamlet F.C, was April 2014. We’d drawn 1 – 1 with fellow playoff chasers Kingstonian, and missed out on the chance for promotion via knockout by a point. In the time since then, Dulwich had grown off and on the field. Crowds which were averaging 667 are now headed over 1,000, which looks even better when you consider that five years ago the average gate was under 300. That’s mostly down to talented manager Gavin Rose and his squad of swashbuckling swaggering dandies. Top of the league as well.

Today’s game was in the FA Trophy against Conference outfit Guiseley, who are two leagues above us. A test, a real test for a team seeking promotion to the Conference South (and are bookies favourites to do it this time). Arriving as early as possible, there were only a few people in the bar. Perfect for getting a nice cold pint of ‘Hamlet’ lager, definitely not rebadged Oranjeboom, and watching Dirty Leeds get a kicking from Sheffield Wednesday.

The expanded crowds and visitors from afar, 400 mile round trip, meant that familiar faces were far between. A sample of the specially brewed Edgar Kail Pale Ale proved fruitful, mind, in starting conversation. I was also presented with my copy of The Moral Victory, the Dulwich fanzine featuring an article from some poor bastard who lives in New Zealand and tries to follow a non league side in South London from there. Poor bastard.

And the rabble are warming up…

Assembling with the rabble in the Toilets Opposite stand, so named because that’s the only signage on it, I realised just how bloody cold it gets in January. Suddenly Summer football and the ASB Premiership didn’t sound like such a bad idea. Fortunately there was a solution, Johnnie Walker combined with a swiftly smoked Marlboro light. Mmmmm, warm.

The crowd came in, and kept coming in. Bloody hell. There’s nearly two thousand people here. The main stand was full, the ends were busy with Guiseley and Dulwich fans taking up position behind their opponents goal. But where we were standing, it was like those penguin doco’s you see. Hundreds of us wedged together on the terrace. And then the singing started.

There’s nothing quite like belting out support for your team, surrounded by hundreds of others. The roar, the immense joyful exuberance of it, is something that reaches into you and brings out something special. Singing of Edgar Kail, who last played for Dulwich in 1933. And the raft of new 80’s and 90’s pop inspired classics. Watching  our goalscoring right back, start laughing as two hundred blokes sing “And we are living in a Mitchell Nelson world, and we are a Mitchell Nelson girl” to Madonna’s Material Girl is something you don’t get in your Premier League matchday experience. And then the ref is a complete arse because how the fuck did you miss that handball you idiot? Are you new to this game? It’s called football you daft twat. 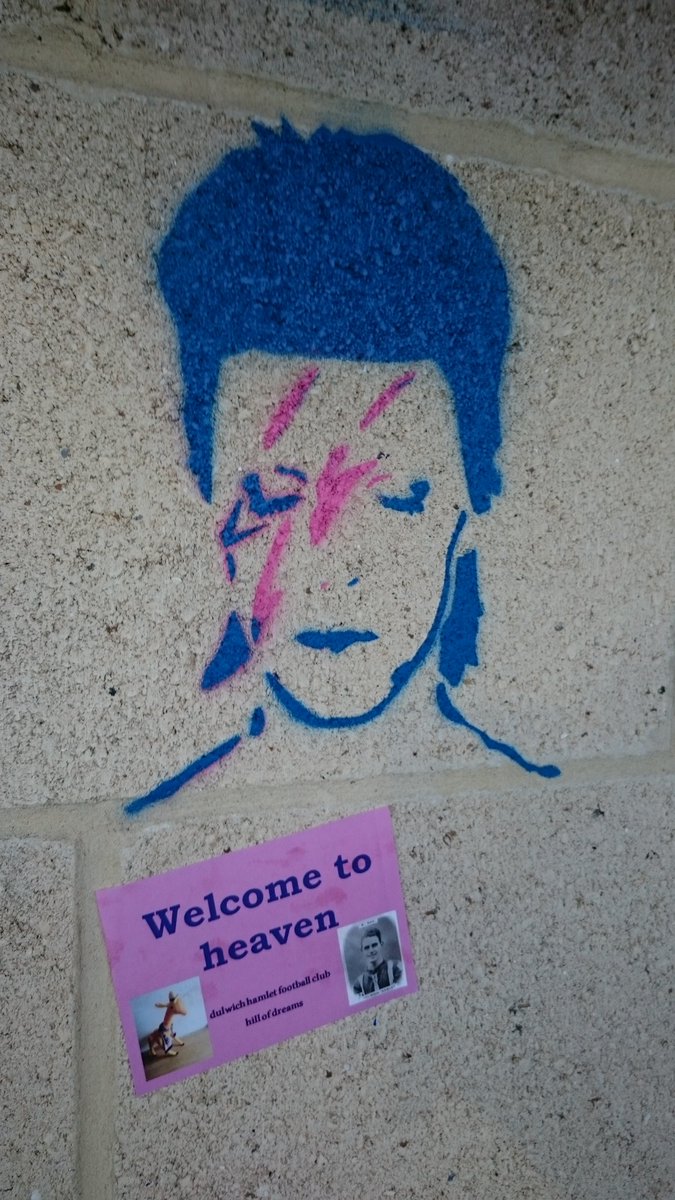 A tribute to a South London legend appeared too.

We were two one down at half time. The first a wonderful strike from the edge of the area through a crowd, nothing the redoubtable Phil Wilson in the Hamlet goal could do. The second was deflected, but fair enough. It’s not like we didn’t have our chances with Albert Jarrett volleying just over and Nyren ‘I can’t believe a league club hasn’t signed him’ Clunis making mugs of defenders with his pace and intelligent movement. Near half time, a goal! And check out the crowd in that video. Mitchell Nelson scoring three in three with a superb devastating slow motion header.

No point trying to get to the bar with that many people in the ground. The queue for the toilets was horrendous too. Safest bet, as usual, was to make friends with Johnnie Walker again and have another tab to keep the lungs aerated for the second half. As a supporter, football is a social activity. I spent some of the game sharing handshakes, hugs and swear words with some of my old terrace friends – people who I spent most Saturday afternoons and Tuesday evenings with over the year or two I lived in London. The game is a meeting point and the experiences are pure escapism. I can admit that it’s one of the few things I miss most, those train journeys to away games with a group of mates – a few beers before, during and then a lot of beers after. 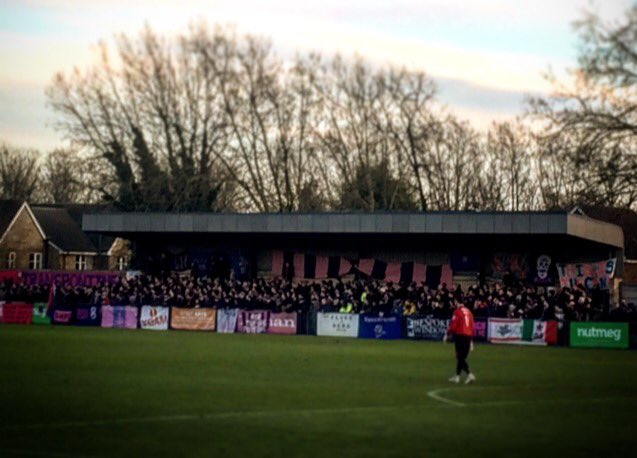 The packed Toilets Opposite stand.

Second half. Darkness descended and the floodlights sent shadows streaming off each player on the pitch. This can be the only explanation for the three or four handball’s from Guiseley that he missed in the last twenty minutes of the game. Not to mention a Guiseley player kicking one of our lads in the stomach, with him frozen to the spot. Not even a card. Fucks sake.

We came close to a replay creating equaliser in the last five minutes, one shot hit the post and then cleared off the line and a follow up arcing just out of reach of oncoming strikers. The crowd were raucous, noisy and willing to urge the team over the line. It wasn’t to be.

I headed off into the night. Roz had been to her first Dulwich match. Watching me bounce, swear, gesticulate, sing, swear, drink, smoke, swear and laugh my way through the ninety minutes, she could see what it meant for me to have been there. And apparently, she even enjoyed it herself. That’s what I call a moral victory.

Highlights. Sure! An outfit called Football Exclusives record most Dulwich games and for $12 a month you can watch. The FA Trophy games are free to air though, so enjoy…

P.S  – Tuscany? Why Tuscany? An explanation can be found here.