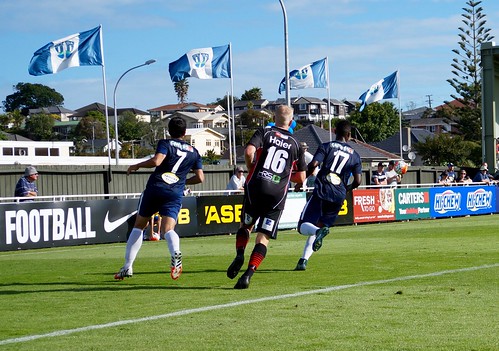 Kiwitea Street at last. After two games at the painted sandpit finally, FINALLY, we are back on home turf. And that is turf, actual turf with a well established root and seed grass covering on it, lovingly cared for by Tom who spent pre-match ensuring his pride and joy was in top condition for the assorted Sky cameras. There were at least three pointed at the pitch and one pointed directly at us, up in the Shed. The 248 had shifted down to the far corner after some enthusiastic spectators had turned up early and claimed our regular spot in the middle of the stand. The 4:35 kick-off time was, well, a bit weird. One unexpected result was the blistering direct sun pointing at the Shed, causing many of those who assembled there in the first half to shift to the shade on the other side. 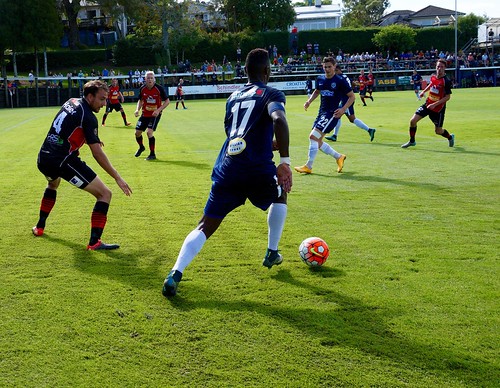 All eyes on the ball.

Both teams went into the game unbeaten and the friendly between the sides in pre-season had ended up with a 2 – 2 draw. Willy Gerdsen’s got his side playing a good tune and his resemblance to Mancunian gutteral howler Mark E. Smith may have something to do with it. The defence had one major change, with Andrew Milne in for Takuya Iwata. Another run out for the midfield of Hudson-Wihongi, Alvaro and Bilen behind the frankly, frightening, combination of De Vries, Moreira and Lea’alafa.

It’s no secret the 248 take a dim view of Sky and their influence on modern football. But given our estrangement from Kiwitea due to the TV requirements of the QBE, we were delighted to be back home and determined to make some noise in the vain hope that Sky will cease sending us to concrete hellmouths and let us play at our own ground. 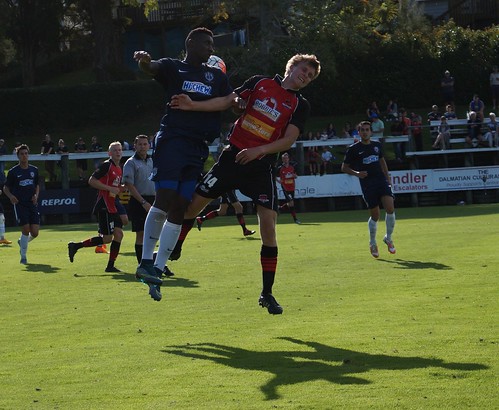 It was clear the players weren’t concerned about their flights to Yokohama in 72 hours time, and it was great to see Joao Moreira getting more time to show what he can do in the air. A couple of good crosses were just marginally mistimed by the big man, but it’s clear he’s a menace in contesting for headers. The game was physical, and a yellow card was shown within the first half hour. Canterbury United had the first major chance through Jesse Dingjan, whose first time half volley from outside the area forced Jacob Spoonley into a save. The unexpected nature of the well aimed dig prevented team mates from reacting as the City keeper palmed the ball away.

It’s hard to say how Aaron Clapham played as his hair was ultimately way too distracting. However, I watched his hair press our players hard in the midfield and whatever is underneath it managed to bring a great amount of stability to his side. In fact, even though this is a biased match report, Canterbury look like a well organised and tactically precise footballing side. 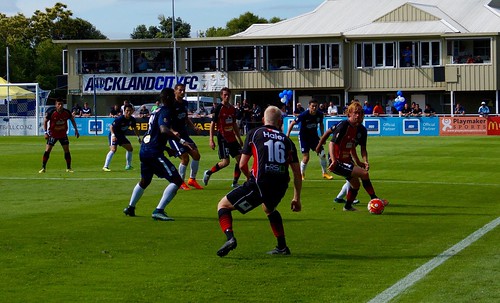 We got the first goal though a rapid counter-attack with play switching from right to left through Lea’alafa, Alvaro and then De Vries who cut inside Brock Messenger and fired home. The camera focused on us in the stands. I waved my scarf around my head. But minor disaster, Angel Berlanga was off injured. Fortunately Michael Den Heijer was on to replace him. Our bench was a bit ridiculous, to be honest. Drake, Den Heijer, Lewis, Tade and Hailemariam. An embarrassment of riches. And that’s with Sammy Burfoot (OLE!) and others not in the match day squad. Phwoar. 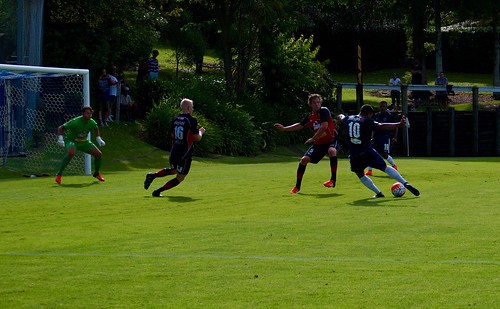 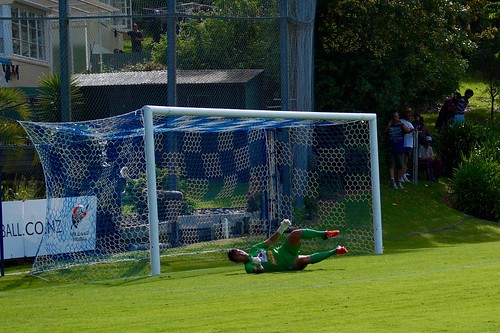 He scores. Eat that, Jamie Vardy.

Half time and a trundle to the bar for something cold. Last season at Cambridge they had a beer truck in a roped off area outside, so you could have a pint and watch the game. I know Phil Goff was there yesterday, surely anyone seeking the Auckland City vote should be able to sort us out a temporary license so we could have a beer or two in the stand? Might aide the singing too.

Canterbury started the brighter and Dingjan was involved again delicately floating the ball past Spoonley and onto the post. The shot, again, was so unexpected that it’d bounced clear before we’d even really noticed it. The replays on YouTube show what a weird ball it was, drifting and unthreatening yet almost bang on target. Then there was more niggle, more needle and a yellow card for Te Atawhai Hudson-Wihongi, who we now have a song for.

It’s time for the weekly rhapsodising of Micah Lea’alafa. I’ve seen the odd decent player in my time as a spectator in New Zealand and the UK. But Micah is up there with the best when it comes to working in a tight space. The highlights don’t catch some of his absolutely ridiculous touches and juggles when surrounded by other players. It’s a joy to watch him play, it really is.

Glen Larmer’s “he’s got it back, how did he get that back…” after he managed to send the luckless Messenger the wrong way describes what it’s like watching him play. The slide rule ball through for a grateful Joao Moreira, finished calmly by the big man, only adds to his reputation. Basically, if he doesn’t score then he’s going to set one up. Every game so far. Blimey.

A shot so cultured it’s being displayed in the Louvre.

Canterbury were pressing though and Spoonley was in action again, tipping the ball wide. A minute later and Hudson-Wihongi, who looks far too composed for such a young midfielder, laid the ball off to Mikel Alvaro. Again, a rather unsung member of our midfield, Alvaro’s passing range and work rate have made us tick along nicely so far this season and he thumped the ball along the ground and into the far corner before racing to right down in front of us where his wife and little one were sat. Roger Milla had his dance, Bebeto swung the cradle, Mikel Alvaro gave his wife and child a kiss and then got the tiniest cutest high five you’ll see.

A few minutes later we lost our impetus slightly as Lea’alafa was replaced by someone called Tade. I know, ridiculous isn’t it? Alvaro also went off in favour of Clayton Lewis. And Canterbury capitalised. They’re a 90 minute team, they’re immensely fit and there was a point between 60 and 80 minutes where they created all the chances, but could only put one, a nice dink and volley from De Jong, away. Three one, fifteen minutes to play. Nerves? Of course! 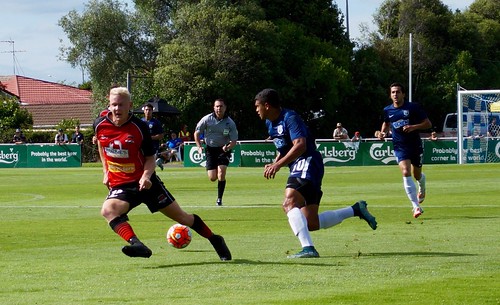 This sums up Messenger’s afternoon, sadly.

The final goal of the afternoon came from Tade’s boot, but Den Heijer’s graft. Taking the ball from inside the centre circle, he played a one-two with Tade before continuing his run and effortlessly placing the ball in Emiliano’s path.  The finish wasn’t easy but it was first touch, far corner and the Canterbury fightback was done. Moreira went close late on, but trying to chip the Canty keeper was an ask after 95 minutes of graft up front. 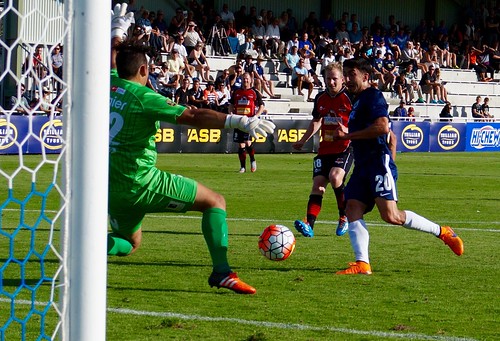 Instants before the strike.

We’re off to Japan next, which means no biased match reports. And I’m off back to the UK next month, so my next reports will be – oh yes – from the Ryman League and the mighty Dulwich Hamlet.

Roz’s match gallery, from where all of these photos are taken with permission, is here. The highlights, which went up the SAME DAY AS THE GAME, are here.