Football isn’t political. It’s sport. It’s exercise. It’s skill and talent and friendship and competition. For the spectator, it’s stories. The last minute winner, the wonder save, that bloody referee. The pain of defeat, the joy of a win. The frustration at two points dropped, the elation at one gained. The dynamics within the stories shift from week to week, but it’s as gripping as any tv series. It’s social on the pitch. It’s social off the pitch. But there’s politics in football. From the weird corruption warp of the FIFA elite to the flares and roar of the curva del whatever in Italy. And I suppose there’s that social link. Where enough people get together to pour emotion, hope and escapism into something, perhaps then they find a more common ground than the green patch they surround.

Perhaps it’s that congregation, an apt word if there is one, of people. Crowds have a certain life of their own, as anyone who’s been on a protest on the verge of turning into a riot will tell you. And even when a club is immersed deeply in the soul stripping acid bath of modern monied top flight football, there’ll remain that independence within the crowd which influences the identity of the club. And even should the club fold, or effectively isolate itself from its support, the crowd take action. FC United are an obvious example, but so too are Portsmouth, Chester and Darlington 1883. The club exists because of the supporters, and the supporters exist because of the club.

How ‘clubs’ become politically aligned has little to do with the players though. Even if that talented prat Di Canio hadn’t decided to ‘Roman salute’ the fans a few years back, it’s pretty well known Lazio’s noisiest supporters are right wing. St Pauli are the go to for left wing activism, both as branding and as a reality. It’s sometimes tied up in the clubs historical origins, the communities from which the support is born. The working class roots of football are still grimly hanging on in there as the professional game becomes ever more unaffordable. And the politics of that aren’t inherently left wing either. At times though it’s easy to see a manifestation of a wider social ill. Monkey chants. Swastikas. Brutal violence.

I suppose politics is too simple a word to use for it, too unfair a label. And characterising Lazio supporters as right-wing is unfair too. Because while it’s true for some of them, it’s not true for all of them. But it’s often incredibly visible, entangled within the insistence of fan culture, stickers, banners and chants. It also exists outside of anything the club attempts to imprint on society as part of its appeal and branding. In a way it separates the retail of the club from their supporters, in that there are some things that no club can package and sell. That independence, that escapism, is important at times. 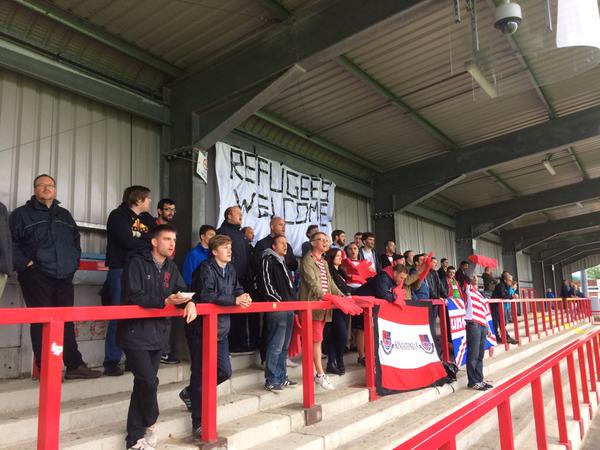 Last week banners went up across Germany at football matches. The pictures of the banners went around the world. The message, ‘Refugees Welcome’, was one which had taken root in Germany long before the current crisis. And it spread through football supporters. There are even plans for banners in the Premier League, the archetypal de-politicised, supporter unfriendly citadel of monied football. It is, undoubtedly, a political message. It’s one that has nothing to do with the result of the matches it was displayed at, and everything to do with those displaying it. The message was political, and it was human. It appealed, not to any political party, but to an idea. That the people watching the game recognised their similarities with those crossing borders. And they had a place where lots of them come together, and are seen. And they used that space, their space, to be heard.

Sometimes politics does wrap around, and weave into, the desire that partisan groups have for independence, for a clear differentiation of identity. The competitive nature of sport and it’s role as an outlet for leisure and narrative needs also provides a fertile ground for these identities to develop. Them and us, our rivals, that team we lost to last year, that bloody ref again, all adds towards a shared past and understanding. This development of a history, of a micro-culture within a culture, makes ways to galvanise that identity desirable. The transmission of football support culture spans countries, spans continents even and is usually assimilated rather than imitated.

Politics is just one part of it, and not one which is accepted by all. Some people are there to enjoy the game, have been going since their dad took them, and will bring their kids in time. Sometimes that identity, the affiliation, is much more personal and human than brand managers can ever tap into. Which sort of, in a way, combines with the messages in the Bundesliga and the pile of donated goods at Dulwich Hamlet’s Tuscanesque Champion Hill this past Saturday. So while football isn’t political, the people who watch football can be. Which can sometimes make the football political. Fluid, mutable. Confusing? Yes.

People go to the football to escape their working lives, they sing together to support something simple and usually entirely out of their control. There’s a collective will from both sides, both groups of spectators and players, for victory, although those in play are the ones who actually make it happen. The rest of us cheer and whoop and curse and damn from the sidelines, enjoying the unfolding story, enjoying the show. Which strangely enough, when you think about it, is a lot like politics.